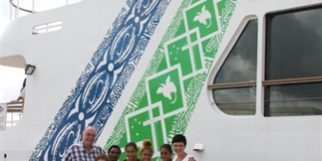 The vessel is en-route to Papua New Guinea (PNG) where it will deliver primary health care, dentistry, optometry and training services in the Southern Region.

YWAM MSA’s Managing Director, Ken Mulligan said that is was wonderful to include the Cairns community in the celebrations as the vessel departs Australia’s waters for its maiden voyage to PNG.

“This is the first time the ship will be going to PNG ? its strategic for us to be stopping in Cairns on our way to express our gratitude to the community while developing our ongoing partnerships.”

The North Queensland based organisation has also just been granted $2 million AUD from the Department of Foreign Affairs and Trade (DFAT) ? the announcement was made on Friday by the Minister for Foreign Affairs, Honourable Julie Bishop.

Federal Member for Leichhardt, Honourable Warren Entsch said that he was thrilled by the announcement.

“YWAM Medical Ships is doing incredible work in PNG ? the fact that the organisation is staffed completely by volunteers means that the funding is invested directly into the communities they are reaching,” said Mr Entsch.

Various groupings will be having events and tours onboard the vessel this week including Tradelinked Cairns and PNG; a network that aims to develop economic, cultural and social links between the two nations.

Supporters of the visit include the Mayor, Cr Bob Manning on behalf of the Cairns Regional Council, Ports North, Advance Cairns, Tradelinked Cairns, Reef and Rainforest Research Centre, PNG and Wantoks Association Cairns, the PNG Consulate in Cairns, Ochre Restaurant and BSE Slipways who have conducted maintenance work on the MV YWAM PNG over the past four weeks.