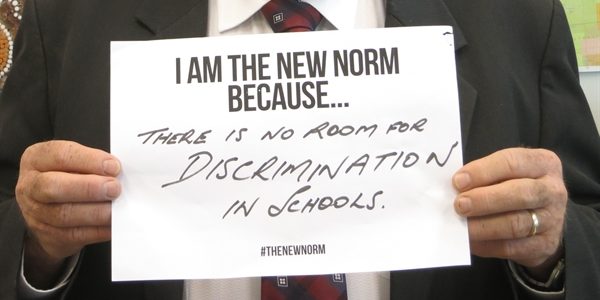 Speaking in Parliament today, Mr Entsch, who is also the Chair of the Parliamentary Friendship Group for LGBTI Australians, highlighted a campaign called The New Norm and described the devastating impact of discrimination on the mental health of young LGBTI people.

“Also, with only 12 per cent of schools around Australia teaching their students that homophobia is wrong, students are at serious risk of being bullied or bullying themselves.

“The New Norm aims to highlight that sexual preference and gender identity do not define an individual. They are simply one of many aspects of them.”

“This is the first national coalition of schools bringing together school staff, students and families to create a safer and more inclusive learning environment,” said Mr Entsch.

“The Safe Schools Coalition is now working with our Parliamentary Friendship Group for LGBTI Australians to get MPs and senators to encourage schools in their region to sign up for this program.

“I’m very excited about my collaboration with these two campaigns which are helping to get the message out there that young LGBTI Australians need our acceptance, our understanding and, most importantly, our support.

To find out more about The New Norm campaign, or to get involved, visit www.thenewnorm.org.