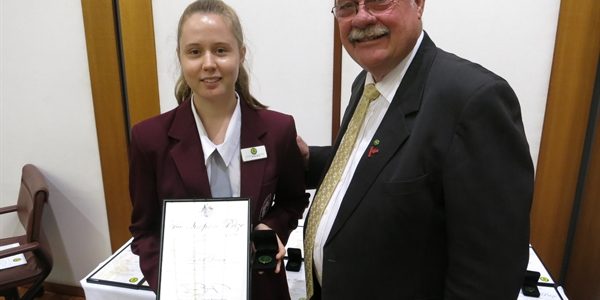 A St Monica’s College student has been awarded one of the nation’s top history honours, being named a runner-up in the 2017 Simpson Prize.

Member for Leichhardt Warren Entsch congratulated Rachael Leeson on the award, which was presented by the Minister for Veteran’s Affairs Dan Tehan at Parliament House in Canberra today.

“Rachael received a medallion and a certificate to acknowledge her achievement and is taking part in a two-day educational program at national institutions in Canberra,” Mr Entsch said. “This has included visiting the National Archives and the Australian War Memorial ? a wonderful learning experience for a young person from the Far North.”

“Her entry demonstrated excellent research and analysis of historical sources, as well as a great deal of hard work,” Mr Entsch said.

“This is a fantastic achievement and it’s great to see a local student recognised with this prestigious award.”

Minister for Education and Training Simon Birmingham said Rachael’s entry was chosen from more than 1,100 students who had submitted an essay or an audio-visual presentation in the 2017 Simpson Prize. One winner and one runner-up was selected in each state and territory.

The Queensland winner, Riley Smithers from Pimlico State High School in Townsville, will have a once-in-a-lifetime opportunity to travel to the Western Front and represent his state at Anzac Day commemorative services in France and Belgium.

“All of today’s winners have shown themselves to be excellent young historians with a detailed, well researched and sophisticated understanding of what happened on the Western Front just over a hundred years ago,” Minister Birmingham said.

“The Simpson Prize is an important way to ensure Australia’s history is recognised by current year 9 and 10 students and future generations.

“That’s why the Turnbull Government has committed $606,000 over three years to the History Teachers’ Association of Australia to manage the Simpson Prize.”