Have your say on fishing & aquaculture inquiry in Cairns 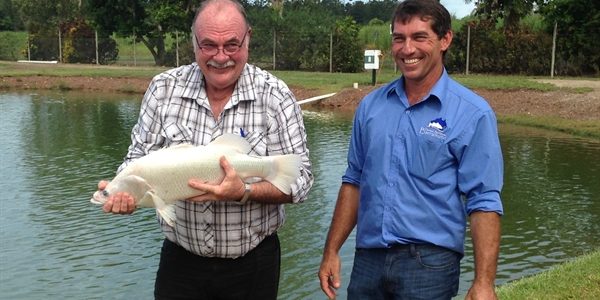 Hooking an albino barramundi at the opening of Hook A Barra near Wonga Beach, with manager Mark Hober. Check out Mark's award-winning Daintree Saltwater Barramundi!

LEICHHARDT MP Warren Entsch is urging anyone who wants a viable and sustainable commercial, recreational and sports fishing industry in the Far North to contribute to a Productivity Commission inquiry that is currently underway.

As part of its inquiry into Marine Fisheries and Aquaculture, the Productivity Commission will be meeting interested parties in Cairns on Tuesday 8 and Wednesday 9 March 2016.

While the Productivity Commission has already locked in meetings with recreational, commercial and environmental groups, anyone with an interest in marine fishing can provide either a submission or a brief comment on the inquiry web page.

“For a long time I’ve argued against the massive overregulation of the Australian fishing industry, which has killed off many of our local operators,” Mr Entsch said today.

“Through its ill-thought-out marine reserves proclamations, the former Labor government – acting under the insidious influence of green lobbyists such as Pew Charitable Trusts – destroyed family businesses that have been operating sustainably for generations.

“Meanwhile it is open slather for our pacific neighbours who are gaining a windfall from the fish that are freely swimming out of our waters. Take the tuna fishery for example – we have incredibly healthy and resilient tuna populations in the Coral Sea and yet other country’s exports fill the vast majority of our canned tuna needs.

“Having just presented the Northern Australia Committee’s final report into aquaculture opportunities, Scaling Up, it’s clear that we must find ways to increase productivity and reduce over-regulation, especially where these regulations differ between jurisdictions.

“We can have a situation where our marine resources can be accessed by multiple users in an environmentally sustainable and economically balanced way.”

The Productivity Commission encourages people to visit their website and read the recently released issues paper at www.pc.gov.au/inquiries/current/fisheries-aquaculture

A questionnaire has also been set up on the website to hear from individual recreational fishers or people/businesses that have an interest in recreational fishing at www.pc.gov.au/inquiries/current/fisheries-aquaculture

The Productivity Commission inquiry will be asking people for their views on ways to improve and simplify fishing regulation without compromising fishery policy or environmental objectives.