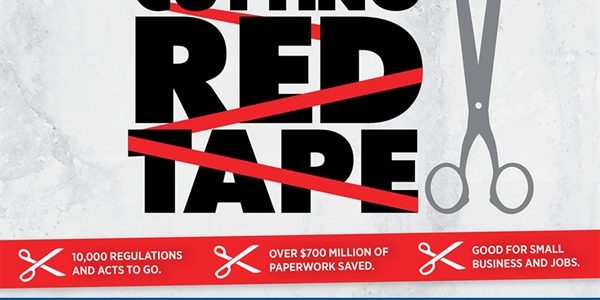 LEICHHARDT MP Warren Entsch has welcomed the introduction in Parliament today of the Government’s ‘Red Tape Repeal Day’ bills, saying there would be “an audible sigh of relief from long-suffering local businesses”.

Next Wednesday’s Repeal Day (26 MAR) will scrap more than 9,500 unnecessary or counter-productive regulations and 1,000 redundant acts of Parliament, saving individuals and organisations more than $700 million a year.

“We are going to put an end to regulation and legislation that is out of date, has outlived its usefulness or is doing more harm than good,” Mr Entsch said today.

Between 2007 and 2013, under the former government, some 21,000 new regulations came into being ? some of which were necessary, others of which were “overkill”.

“The impact of all this regulation has been noticed internationally ? ranked by its burden of government regulation, Australia is 128th in the world ? between Romania and Angola,” Mr Entsch said.

“Locally, given that about 60 per cent of businesses are sole traders and 85 per cent have fewer than five employees, they are suffocating in red tape and it’s time to say ‘enough’.”

Introducing the bills in Parliament this morning, Prime Minister Tony Abbott outlined a wide range of redundant legislation that is going to be repealed next week.

“These include old acts that don’t apply in today’s society ? for example, the 1970s conversion from imperial to metric measurement and the act that enabled the construction of the Snowy Mountains Scheme which was completed in 1974,” Mr Entsch said.

“After repeal day, films will only need to be classified once ? not each time they’re re-released in DVD, Blu-ray or 3D, and job agencies will no longer need to keep paper records of every applicant.”

Mr Entsch said the Government had already started the process of repealing the Carbon Tax and the Mining Tax, and 55 announced-but-unlegislated tax measures will no longer proceed ? including the previous government’s $1.8 billion FBT hit on the car industry, and the cap on self-education expenses that would have hit tradies, nurses and teachers.

“At a later date, it’s also about getting rid of current legislation that adds unnecessary burdens to organisations, such as Labor’s Australian Charities and Not-for-Profits Commission and the requirement that businesses administer the former government’s paid parental leave scheme.

“As the Prime Minister said, more regulation is not the solution to every corporate, community or personal failing.”

The ongoing focus on deregulation also means that every cabinet submission now includes a regulation impact statement so that its potential impact on business, community groups and households can more readily be identified.

“Next week’s repeal day will be the first of many because we’ve promised to hold at least two a year,” Mr Entsch said.

“This is a fantastic move and I’m proud to be part of a Government that fulfils its promises when it comes to making people’s lives easier, not harder.”