Full steam ahead for NAIF in Cairns 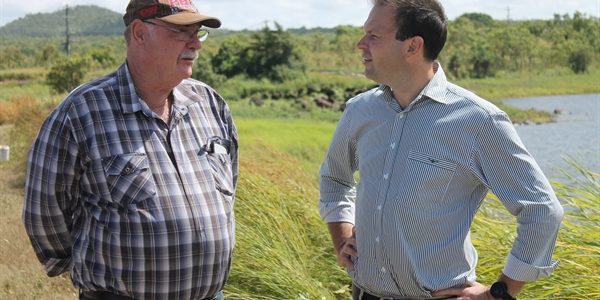 WARREN Entsch, Federal Member for Leichhardt and Chair of the Joint Select Committee on Northern Australia, says he is thrilled with the passing of the Northern Australia Infrastructure Facility Bill 2016 through the Senate this week and the allocation of funding in last night’s Budget.

“The Bill passed the House of Representatives during the previous Parliamentary sitting on April 19th and was introduced in the Senate the same day,” Mr Entsch said.

“Even so, there were some who were quick to accuse the Government of ‘missing the boat’ on pushing the legislation through the Senate in time for the NAIF to start from 1 July 2016.

“This proves that this is not the case at all, we always said the Bill would be prioritised in the next sittings and the only threat to this occurring was if the Labor Party chose not to support the Bill. Given it has had bipartisan support to date, this would have been very disappointing.

“The Senate spent much of Monday debating the bill and the Australian Greens quizzed the Minister for Northern Australia, Senator Matt Canavan, on the specifics Monday evening.

“Nevertheless, the Bill did receive bipartisan support and was passed 30-10 so I’m very pleased that the Northern Australia Infrastructure Facility will commence as scheduled on 1 July.”

In last night’s Budget, the Government allocated $43.8m over five years to establish the NAIF in Cairns as a corporate Commonwealth Entity. The NAIF will be administered by a Board which will be guided by an investment mandate to be issued by the Minister for Resources, Energy and Northern Australia.

“These dollars on the ground reinforce our commitment to getting the NAIF up and running, and I was also very pleased to see the announcement of $2 billion for the National Water Infrastructure Loan Facility ? here is an ideal opportunity for projects such as the Lakeland Irrigation proposal to progress.”

In the House of Representatives on Monday Mr Entsch presented a report from the JSCNA on the NAIF.

“The NAIF will provide the necessary financial assistance to begin to address the infrastructure gaps the committee highlighted in its Pivot North report,” he said.

The report clarified the official geographic boundary of ‘Northern Australia’ as defined in the NAIF bill, and confirmed the aim of the NAIF to partner with the private sector to develop projects that, despite being commercially viable, have not been able to attract sufficient investment to go ahead.

“In its own right the facility's $5 billion investment in infrastructure is significant, but by leveraging private sector capital, the value of the infrastructure projects it supports will be far greater than $5 billion,” Mr Entsch said.

He described Northern Australia as a region of “vast potential”, and said the NAIF will accelerate the development of an infrastructure base that can underpin the long-term social and economic development that is crucial to realising this potential.

“For these reasons, the committee recommended that the Parliament pass the Northern Australia Infrastructure Facility Bill 2016.”