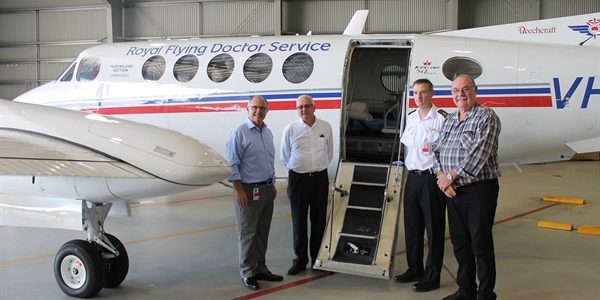 THE ROYAL FLYING DOCTOR SERVICE (RFDS) today welcomed the arrival of the latest addition to its aeromedical aviation fleet ? a new 2014 model Beechcraft B200 King Air aircraft for its Cairns Base.

The aircraft was unveiled at an official ceremony attended by the Hon. Warren Entsch, Member for Leichhardt, and Alan Smith, CEO of Hawker Pacific.

RFDS (Queensland Section) CEO Nino Di Marco said that this new aircraft would play a pivotal role in delivering medical care across Far North Queensland over the next decade.

“Last year our Cairns based aeromedical crews airlifted over 1,000 patients, flying around 1,462,000 kms in the process,” said Mr Di Marco.

“This new aircraft can expect a similar workload, covering a vast geographical area from its operational hub, stretching right across the Cape York Peninsula to our north, and west into the lower Gulf,” Mr Di Marco said.

The Hon. Warren Entsch MP said the Federal Government was delighted to be able to support the purchase of this new Beechcraft B200 King Air, which is at the forefront of navigation technology and equipped with the most up-to-date navigation and flight management systems.

“The arrival of this aircraft is great news for the RFDS and for the people of Far North Queensland,” Mr Entsch said.

Mr Di Marco said an aircraft of this type costs in the vicinity of $8 million to purchase and medically equip to a standard equivalent to an intensive care unit.

“This advanced technology provides early warning of other air traffic and allows the aircraft to fly at altitudes up to 11 km (35,000 feet), using less fuel and travelling at greater speeds. Additionally, the enhanced radar system enables it to avoid some turbulent weather,” he said.

“While we acknowledge the support of both the federal and state governments, it is the generous support of corporates, communities and individuals that enables us to upgrade and renew our fleet and the associated life-saving medical equipment,” he said.