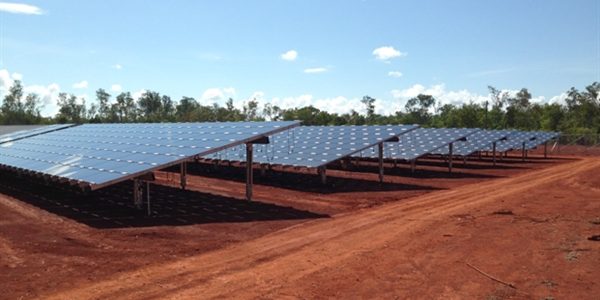 The Australian Renewable Energy Agency (ARENA) has partnered with Rio Tinto and First Solar to deliver the first phase of this groundbreaking two-phase project.

The Weipa Solar Plant’s 18,000 solar photovoltaic (PV) panels have begun feeding electricity into the mine’s existing mini-grid. The electricity will be purchased by Rio Tinto under a 15 year Power Purchase Agreement.

“The Australian Government, through ARENA, has provided $3.5 million support towards this landmark project, which is set to demonstrate that solar PV power is a reliable and cost effective energy option for off-grid commercial operations and remote communities,” Minister for the Environment Greg Hunt said.

Contingent on the success of the first phase of the Weipa Solar Farm, ARENA has committed up to $7.8 million for a second phase, which would deliver an additional 5 MW and include storage.

The 1.7 megawatt (MW) capacity solar plant has the capacity to support up to 20 per cent of the township’s daytime electricity demand. This will reduce the diesel usage at Weipa’s power stations.

“The first phase of the project is set to displace up to 600,000 litres of diesel each year and reduce Weipa’s greenhouse gas emissions by close to 1,600 tonnes a year. It’s good for business, good for communities and good for the environment,” Mr Hunt said.

“ARENA has been brought under the umbrella of the Department of the Environment to better coordinate investment in new renewable technologies, with a particular focus on solar and storage.”

Federal Member for Leichhardt Warren Entsch congratulated Rio Tinto and First Solar on the significant achievement which, he said, had a reach that extended well beyond Australian shores.

“This project is another great example of leading renewable energy innovation being delivered right here in Queensland’s Western Cape by business and government,” Mr Entsch said.

“As well as keeping Australia at the forefront of global innovation, projects like this bring jobs and training opportunities and align well with the Government’s focus on developing Northern Australia.”