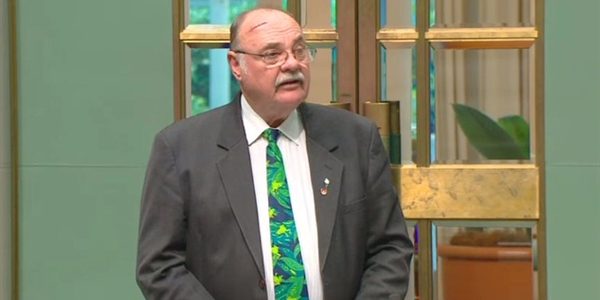 LEICHHARDT MP Warren Entsch has backed legislation that would see dual-nationality citizens who support or engage in terrorist activities against Australia stripped of their Australian citizenship.

“Supporting and engaging in terrorist activities against Australia's interests is a breach of a person's commitment and allegiance to our country, a bond that should unite all citizens,” Mr Entsch said.

“These new powers in the bill are, I believe, a highly necessary and appropriate response to the evolution of the terrorist threat.”

Mr Entsch described the “pride and achievement” on the faces of more than 80 migrants at a recent Cairns Regional Council citizenship ceremony, and his visit to Aussie troops serving in the Middle East, as examples of people placing high value on Australian citizenship.

He said he “could not help but contrast these situations” with the string of terrorism incidents in Australia ? from Sydney’s Lindt Café siege to fatal attacks on police officers and the recruitment of youth to extremism.

“Do the actions of these perpetrators, themselves Australian citizens, bear any commonality with the values held by the new citizens in Cairns or the members of our Defence Force? No they do not,” Mr Entsch said.

“The reality is that the Australian social landscape is changing and the terrorist threat is rising. Our security agencies are currently managing over 400 high-priority counter-terrorism investigations. This number has more than doubled since early 2014.

“Around 110 Australians are currently fighting or engaged with terrorist groups in Syria and Iraq. About 190 people in Australia are providing support to individuals and groups in the Syria/Iraq conflicts through financing and recruitment, or are trying to travel there themselves.”

Mr Entsch said Australia was not acting alone in taking steps to target dual citizens, with the UK and Canada both passing similar legislation in the past 18 months.

To be considered for citizenship revocation, a person must be sentenced to at least six years' in prison for treason, espionage, terrorism, international terrorist activities using explosive or lethal devices, treachery, sabotage or foreign incursions and recruitment.

“The actions must be carried out with specific intention, which could be to advance a political, religious or ideological cause or to support, promote or engage in a hostile activity in another country, or it could be on the instructions of a declared terrorist organisation,” Mr Entsch said.

The Bill has been scrutinised by parliamentary committee and Mr Entsch said he was pleased that safeguards were in place “because we are dealing with a highly complex situation”.

“People will not be deemed to be in the service of a declared terrorist organisation if their actions are not intentional, if they are forced to do them under duress or if they are doing them for the purposes of independent humanitarian assistance,” he said. “They also cannot have their Australian citizenship revoked if it would render them stateless.”

“This bill provides our agencies and authorities with appropriate measures to penalise people who treat their Australian citizenship with contempt,” the Leichhardt MP stated.

“These are people who enjoy the rights and privileges of Australian citizenship, including freedom of speech and the ability to travel to many countries, yet who actively speak out or fight against the very system that has enabled these freedoms.

“It clearly does not make sense to allow these people to continue to remain a part of our society.”