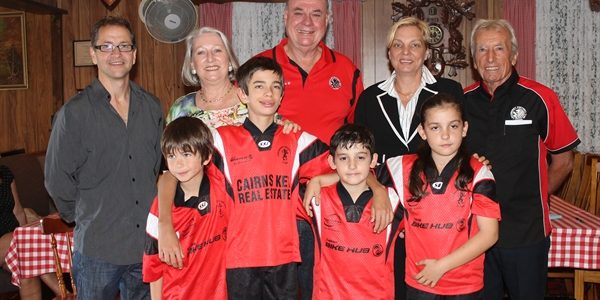 DELICIOUS German eats and treats were on display as Federal MP Warren Entsch joined Queensland Senator Sue Boyce and a host of special guests to mark the 200th anniversary of Ludwig Leichhardt’s birth this morning.

“When I started researching Ludwig for this event I was overwhelmed with what I found,” Mr Entsch said.

“He was nothing short of courageous, choosing to travel to Australia from Germany simply because he’d seen samples of our flora and fauna and thought it peculiar.

“Given that much of the country was still unexplored, he figured he could serve as an artist on an expectation and collect samples.”

Leichhardt covered thousands of kilometres during his expeditions including a 5000km trek which led him from Port Jackson to Port Essington.

Prof. Crayn said he had been “dumbfounded” to discover the true extent of Leichhardt’s legacy.

“He really was the original German backpacker, young, independent and adventurous,” he said.

“Today nearly 3000 scientific specimens of Australian plants can be attributed to him.

“He indulged a true passion for natural history that we have all benefited from.”

Mr Entsch said despite all his incredible achievements, there was no question the overwhelming legacy of Leichhardt was in his name.

“Of course you have this electorate, which is named in his honour,” he said.

Senator Boyce also spoke about her own experience retracing Leichhardt’s steps to mark the anniversary.