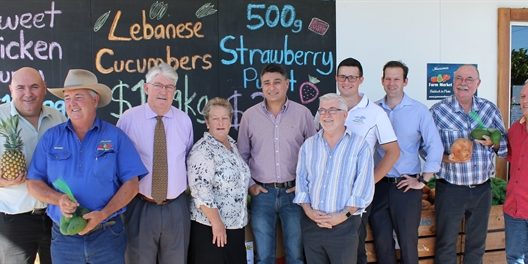 Under the plan, two sections of the Hann Highway will be upgraded with a focus on widening, strengthening and sealing works, which will make the road less susceptible to flooding and wear and tear caused by heavy vehicles.

Between Mount Garnet and the Lynd, more than three kilometres of existing single lane sealed road will be widened and strengthened to two lanes, removing the last section of single lane road between The Lynd and Cairns.

In addition, 36 kilometres of the remaining 100 kilometres of unsealed road between The Lynd and Hughenden will be progressively upgraded.

Mr Entsch said he and other Coalition MPs were determined to see the Hann sealed in its entirety.

“This is just the start of works and it’s important that we continue to work with the Queensland Government on a plan for the remaining unsealed sections of road,” he explained.

“By allocating the funding progressively, it gives the local councils of Flinders and Etheridge Shire an opportunity to engage their workforce on the upgrades. There’s no doubt that they are very capable, and can do the work at a very reasonable price.”

Mr Entsch commended Advance Cairns, the Cairns Chamber of Commerce, and members of the Hann Highway Action Group for their strong advocacy on the project.

“This is an important step towards getting the Hann Highway sealed and cutting 10-15 hours ? or 800 km ? from the road journey between Cairns and Melbourne, which can only be good news for transport operators, tourism and the agricultural and mining sectors.”

Critically, establishing a sealed road with a width of eight metres also ensures that governments of all levels are relieved of the costs associated with maintaining an unsealed road during the north’s wet season.

The upgrades to the Hann Highway form part the Coalition’s plan to strengthen economic development opportunities and create jobs and growth in Northern Australia.