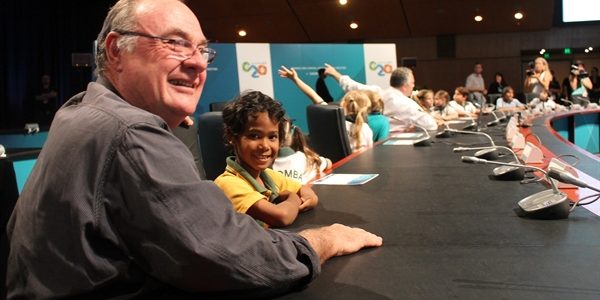 The Treasurer’s comments, at Question Time yesterday (MON), were in response to a question from Leichhardt MP Warren Entsch, who asked Mr Hockey to update MPs on the outcomes of the G20 and what these would mean for growth and jobs.

The Treasurer thanked Mr Entsch for his contribution to the “incredibly successful” event, which included taking Xavier Giocanti, the partner of IMF Managing Director Christine Lagarde, on a Hartley’s Creek crocodile adventure on Sunday.

“Three and a half thousand people were involved in hosting and facilitating the G20 finance ministers meeting in Cairns,” Mr Hockey told Parliament.

“The people of Cairns, led by the Member for Leichhardt, the mayor, Bob Manning, and the entire council were outstanding hosts.”

The Treasurer said he recognised that there was “a reasonable degree of skepticism” about Australia taking on the G20 at the time of the announcement.

However, the first meeting in Sydney at the beginning of the year changed the discussion of global finance ministers ? setting a two per cent global target to increase economic growth, to increase the size of the global economy by $2 trillion and to create 20 million new jobs.

“It has taken a great deal of effort, under the presidency of Australia… to get people across the line to help to deliver the growth plan that is 90 per cent of the way there,” Mr Hockey explained.

“There is still much work to be done, including a very important Leaders’ Summit in Brisbane in November.”

Outside of parliament, Mr Entsch said: “We should be extremely proud of how well we, as a community, hosted the G20 delegates.

“We’ve well-and-truly shone all throughout this entire event ? when the eyes of the world were on us.

“This summit really proved that Cairns is a city that can punch well above its weight and be a destination of choice for many future, international events,” he ended.