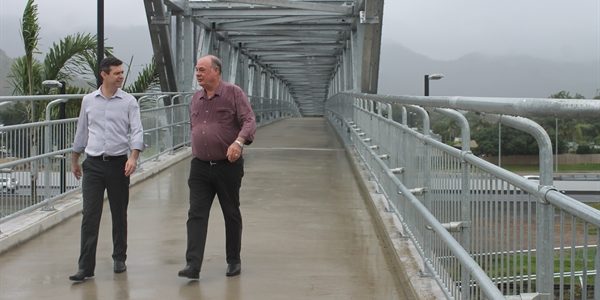 MOTORISTS on the Bruce Highway will benefit from reduced congestion and improved road safety with the opening of Stage 1 of the new southern approach into Cairns today.

Acting Prime Minister and Minister for Infrastructure and Regional Development Warren Truss said the Australian Government has contributed $150 million to the project which will help to reduce travel times and congested driving conditions on the busy highway.

“This project is yet another example of the Australian Government’s commitment to meeting Queensland’s infrastructure needs,” Mr Truss said.

“We have committed a record $13.4 billion to transport infrastructure in Queensland, including $6.7 billion for Bruce Highway upgrades alone. We have funded 45 new projects along the Bruce Highway in this year’s Budget and continued funding for 16 existing projects to bring the highway up to the standard expected of Queensland’s main freight and traffic artery.

“Projects like this are a prime example of our Government’s commitment to building a strong, prosperous economy, boosting productivity and creating jobs by investing in the infrastructure of the 21st Century. Fixing the Bruce will stand Queensland and, indeed, Australia in good stead for generations to come.”

Federal Member for Leichhardt Warren Entsch said 424 direct and indirect jobs were supported over the course of construction, making a significant contribution to the local economy.

“This has been good news for jobseekers in the region and has helped to boost economic activity not only in Cairns, but in the wider Queensland economy as well.”

“Works have involved constructing an additional inbound lane and road overpasses, and a new dedicated overbridge that will improve safety and access for pedestrians and cyclists.”

Stage one of the Cairns Bruce Highway Upgrade master plan has now been completed with planning for stage two underway. The Australian Government has committed $46.4 million towards the $58 million Stage 2 Cairns Southern Access Corridor upgrade, in partnership with the Queensland Government.