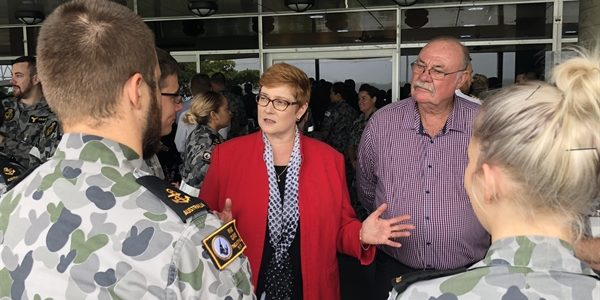 Cairns and Far North Queensland will continue to play a key supporting role to our Australian Defence Force.

Federal Leichhardt MP Warren Entsch welcomed the significant investment Defence was making, and will continue to make, in Cairns and Far North Queensland.

“The Federal Government’s first priority is the safety and security of Australia and its people,” Mr Entsch said.

“Cairns and Far North Queensland is home to more than 1,200 Defence personnel, more than 200 Defence housing properties and a range of key ADF facilities, including HMAS Cairns, Porton Barracks, RAAF Base Scherger, and the Joint Defence Facility on Thursday Island.

“This budget provided national and economic security by continuing to deliver on our ongoing commitments to Defence operations around the globe and the capabilities set out in the 2016 Defence White Paper.”

Mr Entsch said Cairns and Far North Queensland had a long history of supporting the Australian Defence Force and this week’s budget demonstrated the government’s ongoing confidence in the region.

He said he would continue to push for a common-user syncrolift facility to be constructed in Cairns.

“The opportunities available for local businesses in Cairns and across the region to support Defence capabilities and infrastructure projects is extremely important to the local economy,” he said.

“I’m proud the government is demonstrating its commitment to local businesses to deliver on this vital work.

“I will continue to work hard for the businesses of Cairns and Far North Queensland to ensure that they have every opportunity to secure work as the government continues to invest in our region.”

Federal Defence Minister Senator Marise Payne said Defence would continue to invest in Cairns and Far North Queensland ahead of key new Navy capabilities coming into service over the next few years.

“HMAS Cairns is going to be home to four of our new Offshore Patrol Vessels which are larger than our existing patrol boats,” Minister Payne said.

“These vessels are going to require significant support from local businesses as we sustain these vessels into the future, as well as the Pacific Patrol Boats that already undergo deep maintenance in Cairns.”

“To accommodate the larger vessels, a significant upgrade to HMAS Cairns is required, starting with the OPV facilities project that will see an investment of $300 million.

“This will be considered by the Public Works Committee in late 2018 with construction to commence shortly after that.

“Furthermore, $22 million has been allocated towards the HMAS Cairns Mid-Term Refresh which is currently undergoing planning.

“The refresh will be part of our Local Industry Capability Plan pilot to ensure that local businesses and trades have the best opportunity possible to secure work.”

Senator Payne said the government continued to plan towards upgrades to RAAF Base Scherger to support the Joint Strike Fighter as part of the New Air Combat Capability Facilities project.

“These projects will help the ADF implement the capability plans set out in the Turnbull Government’s 2016 Defence White Paper as part of our $200 billion investment in Defence capability,” she said.

“The 2018-19 Budget confirms that the Turnbull Government is committed to keeping our nation safe and secure and will grow Defence spending to two per cent of GDP by 2020-21.”