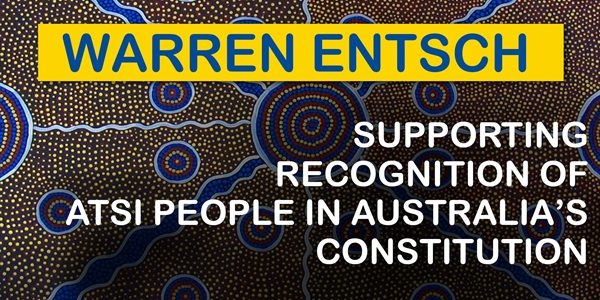 “Our nation’s founding document should reflect Australia as it is, not how it was perceived 120 years ago,” said Mr Entsch.

“We all know that true reconciliation and healing takes time, which is why we’re taking steps here and now to make sure First Australians are formally recognized as such in our constitution.

“The Coalition has provided $14.6 million over two years – from July 2015 to June 2017 – to support the Referendum Council as they consult with Aboriginal and Torres Strait Islander communities and leaders around the country.”

Mr Entsch said the consultations will be formalized into a report for the Australian Government, before a vote on the constitutional change is put to the Australian people.

“It also needs to acknowledge the humanity and history of our continent’s first inhabitants in language that is meaningful to Aboriginal and Torres Strait Islander people and to the broader Australian community.”

Mr Entsch said the Referendum Council was working towards a recognition referendum date of Saturday, 27 May 2017, but that the date may change due to the complexity of the issue.